A conservative Lutheran monthly magazine with articles, devotionals, and CLC news. Focused on the proclamation of the Word.

About the Lutheran Spokesman

The first issue of The Lutheran Spokesman was printed and distributed in June of 1958. Its fifteen pages were mimeographed and the subscription rate was by voluntary contributions through church offerings or $1.00 per year for an individual subscription.  The periodical had been authorized by the Interim Conference held in Cheyenne, Wyoming the previous month. The first editors were Pastor W. Schaller Jr. and Pastor N. R. Carlson. The publication was to be published bi-monthly. Two-hundred copies of the first issue were printed and distributed, the second, seven-hundred, today the circulation is one thousand nine hundred eighty-eight.

“The trend has moved steadily, turning the face of the churches from the other world to this world and its problems.”

In his first editorial, Pastor Schaller asks the question; “Why another one? Are there not more than enough papers proclaiming the heritage of the Lutheran Reformation in America?” His answer to that question holds true for us fifty some years later.  “The trend has moved steadily, turning the face of the churches from the other world to this world and its problems.”  Therefore as Martin Luther was the spokesman for the Word, Pastor Schaller writes, “And that, pray God, will be our policy. “It is written,” and we cannot add or subtract from that message, but proclaim the whole counsel of God.” This policy was illustrated on the cover of The Lutheran Spokesman for many years, the testimony of the stern faced Reformer, pointing with purpose at the clear Word of God. “The Scripture cannot be broken.” Jn 10:35.

“Why another one?”  “What makes you different?” These questions are still being asked of us today and our answer is still the same as Pastor Schaller’s concluding paragraph. “On the basis of that clear word (Jn 10:35), it will be our purpose and policy to feed God’s flock, to protect them from false teaching, to attack when necessary all teachings and practices which are not in accord with the Word, for Scripture cannot be broken. “We now implore God the Holy Ghost!” W.S.”

Statement of Ownership,
Management, and Circulation

The Lutheran Spokesman, with a paid circulation of 1,886 and a total distribution of 1,988, is owned and managed by the Church of the Lutheran Confession of 3015 Avenue K NW, Winter Haven, FL 33881.
–Benno Sydow, Business Manager

There are no reviews yet.

Be the first to review “Lutheran Spokesman” Cancel reply 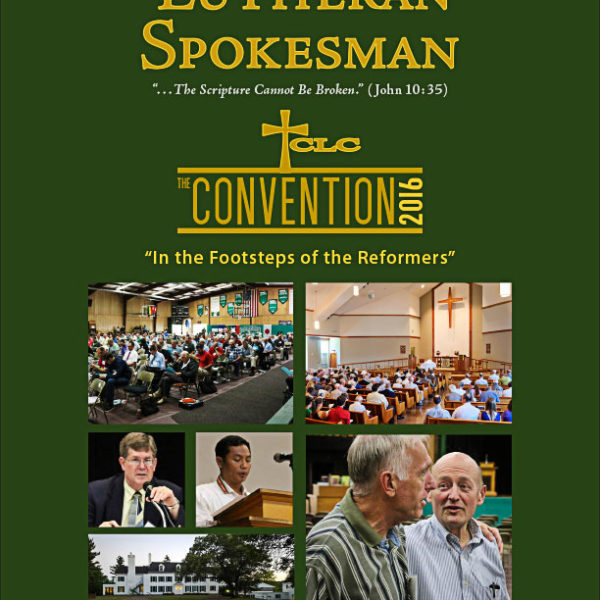